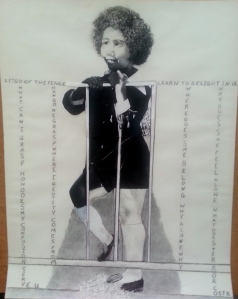 ONE: According to, Rape Abuse & Incest National Network (RAINN), we live in a country where only 40 out of every 100 rapes ever gets reported, where just 4 of the 40 actually lead to a felony conviction and only 3 of 100 rapists will spend even a single day in jail. In other words, 97 0f 100 rapists walk free, while too many survivors stay locked inside cages of fear. The year I turned nine there was a trifecta of events that shaped the woman I am today. First, my epilepsy symptoms subsided and my Mama went against the doctor’s orders to take me off my meds. After spending eight and half years of my nine years on the planet in a prescription based fog, coming off meds should’ve been cause for celebration. However, the second event was being raped by my maternal uncle, a secret I kept for seventeen years because I felt responsible, in my mind, he wasn’t the damaged goods, I was. The third thing that happened the year I turned nine was learning to write poetry, I know now that having a place to silently express the secrets eating me up inside kept me alive. My life preserver for twenty-one years was writing poetry into dark drawers. Still, I dropped out of high school at fifteen with everyone (including me) thinking I’d be dead before age twenty because I didn’t actually share my poems with anyone.

TWO: In spring of 1995, I had the incredible honor of working with the Poet Laureate of San Francisco, Janice Mirikitani, and UC Berkeley Professor, June Jordan. During their three years of spiritual and intellectual collaboration at Glide Memorial Church, June Jordan’s Poetry for the People (P4P) ran six different, six-week workshops. When the first workshop started my own daughters were my only reasons for living. I had a little over three years clean and sober, but no job or savings or ideas about how to make things better except to keep showing up. I went to 12-step meetings six days a week, church on Sundays and I wrote poetry every single day.

Through Glide’s P4P, I found, at last, an encouraging environment to manifest vivid, urgent, truth-telling poetry meant to be published and performed. Finally my experiences as a woman of color surviving generational racism, incest, rape, addiction, silence and domestic violence mattered. May 31, 1995, eleven years to the day after my father died, I ended up publishing my first poem and reading out loud in front of two-thousand people at Glide, as part of the church service. As a direct result of Janice and June, Glide and P4P, I studied for and passed my GED, started my first semester at Mills College on academic probation and finished it on the Dean’s List. Within six and a half years I went from being a John F. Kennedy High dropout to earning a Master’s Degree in Transformative Arts from John F. Kennedy University.

THREE: The seeds of this collection took root in my three years of P4P classes at Glide; a semester cross-registering as a P4P student at UC Berkeley; and a year working as a Student Teacher Poet (STP) – helping to teach other UC Berkeley students the particular poets, cultures and forms that I’d learned. Finding my voice through poetry inspired years of prolific writing, teaching and performing with my community, from: classrooms in 5th-12th grade, colleges and universities to homeless shelters, juvenile hall facilities and women’s recovery homes to non-profits and intimate circles inside people’s homes. I also spent five years hosting an open mic at La Pena Cultural Center in Berkeley. I spent 15 amazing years on staff at the VONA Voices Writing Workshops, spent being of service to writers of color. However, after my oldest daughter was raped, I barely wrote anything. Sometime during those years that I learned that both my parents had been raped at age nine as well. For over ten years I’ve struggled with the physical and emotional effects of PTSD, without understanding what was happening to me, let alone how to stop it.

FOUR: On Valentine’s Day 2013, Eve Ensler’s One Billion Rising mobilized one billion women and girls in 207 countries to dance together demanding an end to the violence committed against us—and I put aside my fears to participate. To stand up that day for both my daughters and myself, knowing one billion of us were rising up around the globe—jolted me from a long-term Post-Traumatic-Stress-induced depression, to the realization that I have to stand up again for her, for me, for the one billion women and girls around the globe who are rising up for justice. According to, Rape Abuse & Incest National Network (RAINN), we live in a country where only 40 out of every 100 rapes ever gets reported, where just 4 of the 40 actually lead to a felony conviction and only 3 of 100 rapists will spend even a single day in jail. In other words, 97 0f 100 rapists walk free, while too many survivors stay locked inside cages of fear. There is too much work to be done for me to remain silent or dormant anymore. Still, this book might never have come to fruition without my dear friend and editor, Jackie Graves. From day one, she believed in me because she remembered someone I had forgotten: the mother, poet, artist and activist, who saw every day still alive, still clean and sober as a miracle; passionate about sharing that spark of possibility with anyone who would listen.

FIVE: Today, publishing this poetic memoir allows me to give voice to the stories that show my community we can do more than just survive, by speaking up, we become living, breathing examples to one another that healing is possible. It doesn’t tell every story, it can’t, but it invokes key areas where redemption from the violations I have endured starts with sharing my stories and the stories my parents never could to encourage people around me to do the same. When I was less than sixty days clean and sober a woman with 23 years of recovery shared about earning those years by choosing her best self, one second at a time, she said, “five minutes or five days or five years from now, I can use if I want to, but right this second I think I won’t”. Think about it, choosing to claim each moment as the moment to love ourselves enough to not be self-destructive, it was the one thing I heard early on I could actually believe in. Her concept became my mantra and eventually morphed into the title of this book.

SIX: Now, standing tall in recovery (clean and sober since November 17, 1991), Write this Second is not just the title of a book; it’s a movement, for me, for my parents, for my children, for all of us; it’s a call to break the silent, secret spell that keeps us buried above ground; to evoke the consciousness that puts an end to the doubts and fears that allow these deadly cycles to continue. Write this second, it is time to heal; to forgive and to live a life of grace guided by faith, love and action. Write this Second, I testify to poetry’s power to transform everything!

SEVEN: In addition to being the author of Write This Second the book, I am proud to say that I am the founder and facilitator of WRITE THIS SECOND the movement. WRITE THIS SECOND’s mission: Lead transformative workshops to facilitate community empowerment; from poetry to embbodi mapping retreats and beyond, at WRITE THIS SECOND we bear witness to our lives as an act of reclamation, to cultivate emotional evolution and a self-acceptance revolution.

We write to reclaim life

to resist feelings of unworthiness

We write to understand

what forms our anger and

what ties our tongues

Purchase Write This Second: A Poetic Memoir here or at any local bookstore

To find a reading, or book a workshop go to www.writethissec.com and learn more, oh wait you’re already here, please look around at workshop offerings, photo gallery, events page, etc. I hope you are inspired and empowered by what you see.

Make sure you go back to the top and investigate the photo, there’s some thought provoking questions, hiding in plain sight? It is a combination of shaded drawing and an actual photograph of me at age 9, done for my Transformative Arts program.

The poetry & art we make is all about consciousness!

WRITE THIS SECOND’s Mission: Lead transformative workshops to facilitate community empowerment; from poetry to embbodi retreats and beyond, at WRITE THIS SECOND we bear witness to our lives as an act of reclamation, to cultivate emotional evolution and a self-acceptance revolution.

Kira Lynne Allen (she/her) is a poet, an artivist, an advocate, and a Certified InterPlay Leader who specializes in leading the creation of embbodi maps with femme-identified Black, Indgenous, Latinx and AAPI (BIPOC) bodies. Her book, Write This Second: A Poetic Memoir, is a truth-telling, visceral story of survival and an urgent, triumphant call to break the silence impacting generations of survivors. Ms. Kira’s goal in bearing witness to her own traumas and triumphs is to cultivate sacred creative spaces that empower and inspire her community. She is a VONA Voices Fellow, a Poetry for the People alumna, and a contributor to All the Women in My Family Sing, Tayo Literary Magazine, and Endangered Species, Enduring Values. She has a BA in Creative Writing from Mills College and an MA in Transformative Arts from JFK University. Kira grew up in the Bay Area and raised two brave, brilliant, resilient daughters in unceded Ohlone land/ Oakland, CA; where she still lives with her partner Kat.